When Necessity Is The Mother Of Invention – Food For Thought

I love hearing about the driving forces behind inventions. Sometimes the reasons are obscure, but many times that force is simply necessity. The following is such an example.

Israel is the home of immigrants from many different countries and cultures, their foods brought with them, adapted and combined with the raw ingredients found locally. Different foods or lack of certain foods define many of the festivals celebrated here.

When you think of the origins of pasta and rice, Israel is not the country which comes to mind. As such, it may be surprising that Israel is the origin of a food which resembles pasta in taste and looks like rice, called ‘Ptitim’. Plato stated that necessity is the mother of all inventions and it appears that such was the driving force behind ptitim. Apparently, in the early years of the State of Israel, there were many immigrants who were used to eating rice. However, rice was expensive and hard to find in Israel. Prime Minister David Ben Gurion turned to Ivgen Propper one of the founders of Osem and requested that he quickly invent a wheat-based substitute for rice. 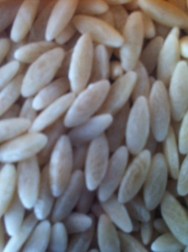 The result was ptitim made from wheat flour roasted in an oven. Originally, ptitim were made in the shape of rice and were known as Ben-Gurion rice. However, since then ptitim can be found in a variety of shapes, including a version resembling couscous. The advantage of ptitim over rice and pasta is that it is quicker to cook and the large surface area can absorb more sauce. The ptitim are usually cooked by sautéing them and then boiling in water.

I have not been able to find a patent or patent application directed to the original invention, however the product has been a commercial success and is still popular more than six decades later.